The next generation of anti-infectives.

We intend to develop and commercialize novel, first-in-class biologic therapies, known as direct lytic agents (DLAs), which includes lysins and amurin peptides, as new medical modalities to treat life-threatening infections, including those caused by drug-resistant pathogens. The increasing prevalence of antibiotic resistance among bacterial pathogens has been widely recognized as an urgent public health threat by the CDC, the WHO, the Infectious Disease Society of America, the Gates Foundation and the Wellcome Trust. 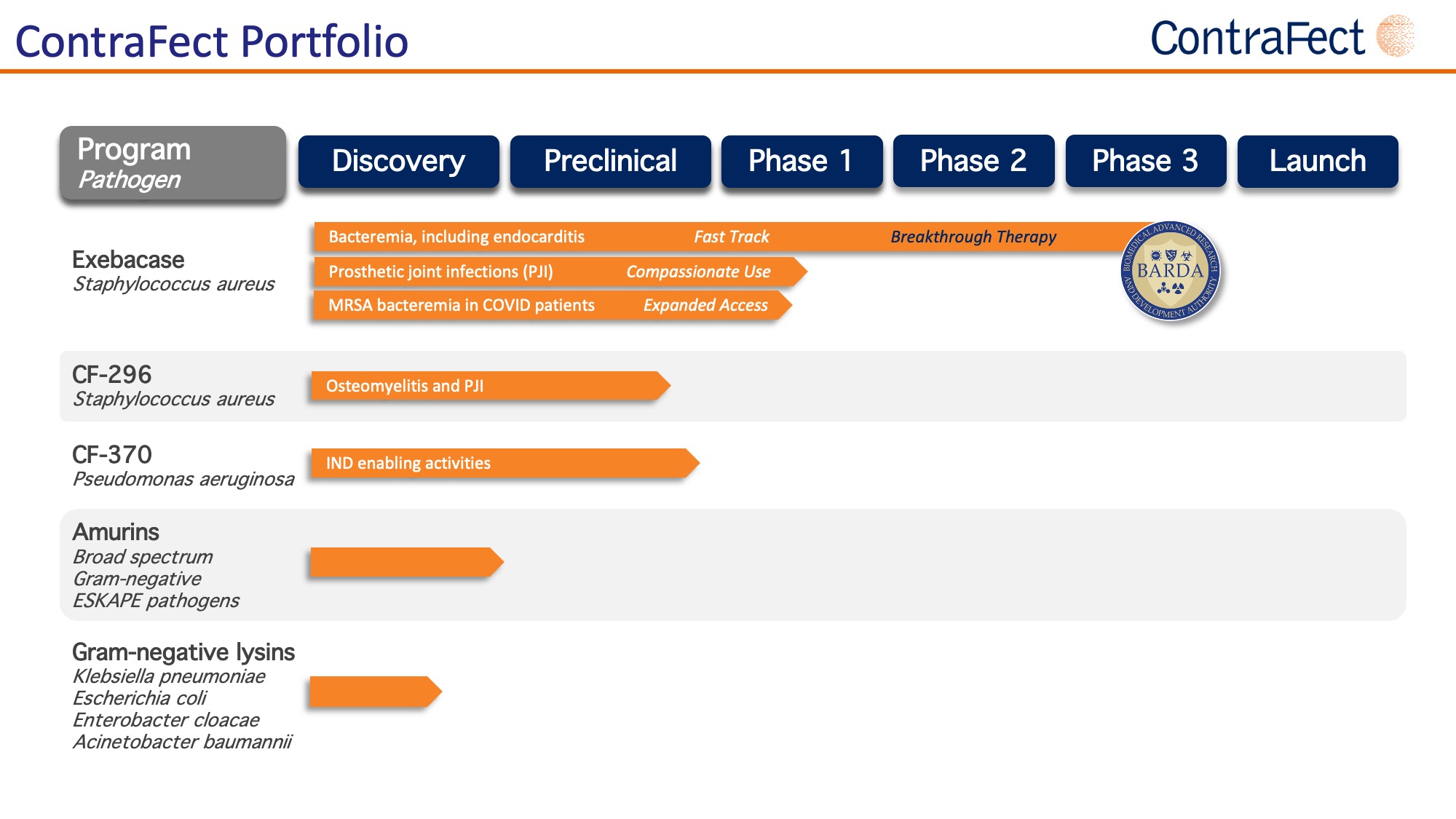 Our lead lysin, exebacase (CF-301) is an investigational product candidate that targets Staph aureus, including MRSA strains, which causes serious infections such as bacteremia, pneumonia and osteomyelitis. Exebacase is currently being studied in an ongoing, pivotal Phase 3 superiority design trial, known as the DISRUPT study. The Phase 3 DISRUPT study of exebacase is a randomized, double-blind, placebo-controlled clinical study conducted in the U.S. to assess the efficacy and safety of exebacase in approximately 350 patients with complicated Staph aureus bacteremia, including right-sided endocarditis. Patients enrolled in the Phase 3 study are randomized 2:1 to receive either exebacase or placebo, with all patients receiving SOCA. The primary efficacy endpoint of the study is clinical response at day 14 in patients with MRSA bacteremia, including right-sided endocarditis. Secondary endpoints include clinical response at day 14 in the All Staph aureus patients (MRSA and methicillin-sensitive Staph aureus (MSSA)), 30-day all-cause mortality in MRSA patients, and clinical response at later timepoints.

In the Phase 2 superiority study of exebacase, the clinical responder rate at Day 14 in MRSA patients treated with exebacase was nearly 43-percentage points higher than in MRSA patients treated with SOC antibiotics alone (74.1% compared to 31.3% (p=0.010)). In addition to the higher rate of clinical response, MRSA-infected patients treated with exebacase showed a 21-percentage point reduction in 30-day all-cause mortality (p=0.056), a four-day lower mean length of hospital stay and meaningful reductions in hospital readmission rates. The FDA has granted Breakthrough Therapy designation to exebacase for the treatment of MRSA bloodstream infections (bacteremia), including right-sided endocarditis, when used in addition to SOC antistaphylococcal antibiotics in adult patients, based on the final data from the Phase 2 superiority trial of exebacase.

We have advanced an engineered lysin therapeutic candidate, CF-370, with potent activity against Pseudomonas aeruginosa (“P. aeruginosa”) into IND-enabling activities. We believe CF-370 represents the first lysin to bypass the outer membrane of P. aeruginosa and to enable potent activity in human serum. We have also developed a novel, engineered variant of exebacase, CF-296, with potential as a targeted therapy for deep-seated, invasive biofilm-associated Staph aureus infections such as prosthetic joint infections.

Our research efforts remain focused on a broad-based Gram-negative discovery program which aims to identify, optimize and develop DLAs that target deadly Gram-negative pathogens. In addition to our lysin programs, we have discovered a novel class of DLAs, known as amurin peptides, which have displayed potent activity against a wide range of Gram-negative pathogens in preclinical studies, including deadly, drug-resistant P. aeruginosa, Klebsiella pneumoniae, Escherichia coli, Acinetobacter baumannii and Enterobacter cloacae bacteria species.

Exebacase is a novel, investigational  lysin with potent activity against Staph aureus, including MRSA strains. Exebacase is being studied in clinical trials as a treatment for patients with Staph aureus bacteremia, including endocarditis.

We have discovered and engineered lysins which target and kill Gram-negative pathogens, including multi-drug resistant strains.

We have discovered a new class of direct lytic agents, antimicrobial peptides that have potent in vitro activity across a wide range of resistant Gram-negative pathogens.

Drug resistance is a global crisis

Illnesses Diagnosed in the U.S.

A bigger killer than HIV/AIDS, Parkinson's Disease, emphysema and homicide, in the U.S.

We are focused on developing first-in-class biologic therapies for life-threatening, drug-resistant infectious diseases.